Years ago I remember watching the US show Malcolm In The Middle and I found it hilarious. Both parents were constantly stressed beyond belief, particularly Hal (played by the wonderful Bryan Cranston, who you may know from Breaking Bad). The three kids were always up to mischief; Malcolm, Reese and Dewey, and it drove their parents crazy!

At the time, I remember being curious about the name Dewey as it’s not a name I’ve ever heard living in the UK. In this article let’s look at this name in more detail, which may be useful for you, especially if you’re considering it for your baby boy. Is it short for anything? What does it mean? And how popular is it among families these days? 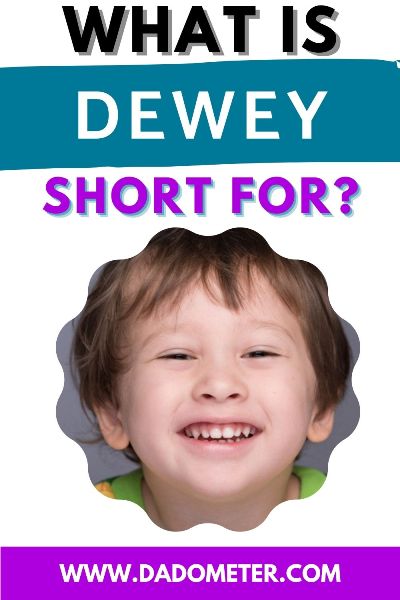 Where does Dewey come from?

Surprisingly, Dewey is not really short for anything and it’s usually a given name in its own right. However, it does have a link with the Welsh name Dafydd (David) which often has ‘Dewi’ as a nickname. Over time Dewey became the anglicized from of Dewi. It is interesting to note that although both these names look similar, the pronunciation is usually different; Dewi (d-ow-ee)  and Dewey (dyoo-ee).

Apparently Dwayne ‘The Rock’ Johnson had the nickname Dewey when he was younger.

As well as a first name, Dewey can also be used as a surname. According to Name Census, Dewey is the 2,926th most popular surname in the United States.

What does the name mean?

Taking Dafydd (David) as the origins of the name, Dewey means ‘beloved’ or ‘cherished’.

How popular is the name Dewey in the USA?

As a boy’s name, Dewey is declining in terms of its popularity in the US. In 1986, it dropped out of the top 1000 and it doesn’t show any signs of a recovery at the moment. This may be a good option for you if you want a unique name for your boy, as its unlikely they’ll have another Dewey in their class!

As a first name, Dewey was most popular at the turn of the 20th century, but it gradually started to decline at the end of the 1920s.

What middle names go with Dewey?

Here are some middle names that should go well with Dewey. If you do decide to go with David as a given name, and Dewey as a nickname, I’ve tried my best to ensure these middle names will work with both options.

Are there any famous Dewey’s?

I can’t think of any famous celebrities with this name, but there have been a few notable people over the years called Dewey:

And here are some with Dewey as a last name:

The great jazz trumpeter Miles Davis had Dewey as a middle name.