Have your considered what nicknames there are for your baby boy? Sometimes it’s a useful exercise to think about short names they might be called when they are older. Furthermore, you can think of a nickname first when you’re discussing baby name ideas with your partner and then think of a longer name afterwards.

Bill has been a popular name for boys over the years but it has fallen out of favor in recent times. So if you’re considering this name for your son, it is not a bad choice as it lies in the sweet spot; not too rare or too popular. But what is it short for? Let’s discuss this in more detail. 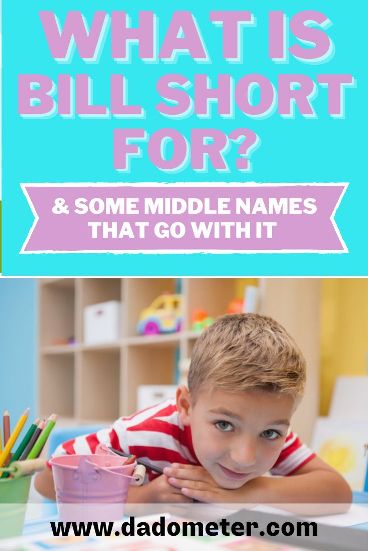 What is Bill short for?

Bill tends to be short for William. This is a little unusual as normally nicknames are very closely related to the full version and at least have the same starting letter e.g Nick for Nicholas, Dan for Daniel etc. However, in this case the first letter is different but it still rhymes so you can see the connection.

Where does it come from?

The idea that Bill should be a nickname for William probably came about in the Middle Ages where there was a trend for swapping the first letter for shortened names. Some also believe that it came about as it was easier to pronounce. For some, Bill is easily to pronounce than Will as it starts with a hard consonant. This may have something to do with the Norman conquest in Britain in the 11th century. The letter ‘w’ is quite rare in the French language and sounds different to the English ‘w’. The name William comes from the French name Willaume, which itself came from the German name Willehelm.

What does Bill mean?

As the name comes from William, the meaning of Bill is ‘resolute protector’.

If you’re considering the name Bill, here are some great middle names that are worth thinking about. If you’re undecided whether to have William or Bill as the birth name, these middle names should sound ok in both cases:

How popular is Bill as a name?

In the USA, Bill has actually declined in popularity since 1900. It was a very popular name in the early part and middle of the 20th century, but it started to tail off in the 1970s. 1993 was the last year it was in the top 1000 boys’ names.

It’s actually more common these days to just call a boy William, or use Will as a nickname. William has been a popular name every year since 1900, always appearing in the top 20.

There are a lot of famous people with Bill as a first name. Here are just a few of them: