Video games are fun to play. Who doesn’t like building an empire and crushing your enemies, or driving like a maniac through the streets of a city? We’ve all played them as children, teenagers and young adults. 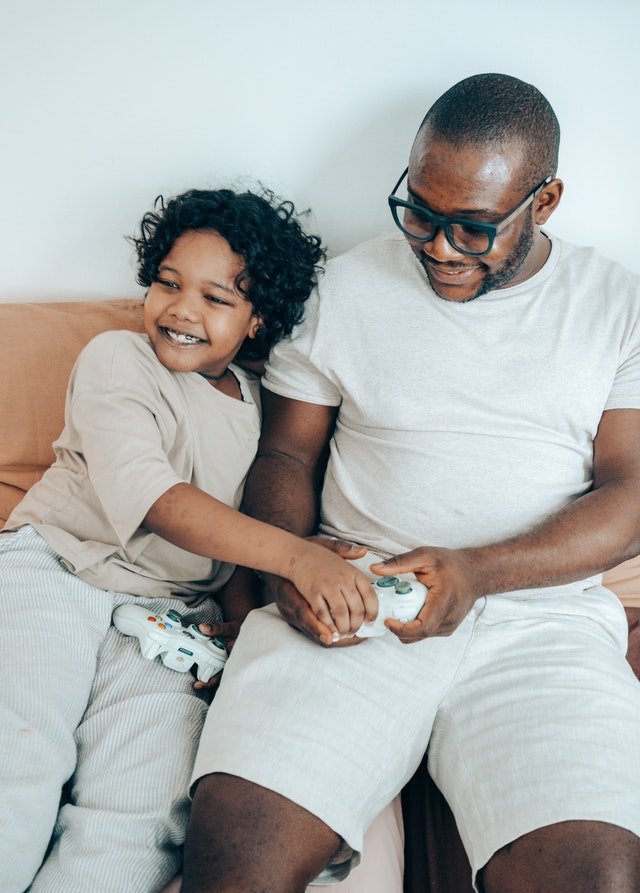 But what happens when you have a young family? Time is no longer a luxury for most parents when you have to juggle childcare, raising kids, work and running a household. So should dads pick up the game controller and play video games? Or should they use their time more productively?

In this article let’s answer this topic and look at the pros and cons of whether fathers should play video games.

What age should a man stop playing video games?

Well, according to the New York Times, the average age is in fact 33. Therefore it shows there must be gamers well into their forties and fifties in order to have an average figure like this. So given that people of all ages are playing video games, why should men stop playing at all? It doesn’t do any harm as long as you play them in moderation and don’t let it affect your role as a parent or husband.

There shouldn’t be any harm in dads playing video games, providing they don’t shirk away from their responsibilities as a father or husband. For some dads who work long hours and don’t have much of a social life, playing video games late in the evening can be a good way to interact with other peers.

How do sons get their dads into playing them?

Most dads would probably enjoy playing video games with their children, but in some cases they are reluctant to try. Although they might have been a gamer when they were a teenager, video games have changed a lot since then with different controllers and consoles. Some fathers might feel a bit embarrassed to try playing them, or they might feel it looks too hard for a newbie.

Games which have a slower pace might be easier for dads to get into, and ones which have simple controls without a steep learning curve.

What are the benefits of playing video games?

..and not just for them to have some down time!

According to a study by Australian and Chinese scientists, people who play video games regularly have a larger amount of grey matter in the brain as well as improved connectivity. Grey matter is responsible for sensory perception and memory recall, amongst other things.

Some strategy games are designed like one giant puzzle, which can take many hours to solve. This is particularly true for role-playing games. Teenagers who regularly play these types of games have better problem solving skills which can lead to higher grades. This was based on a study conducted in 2013.

Playing video games might seem like an individual activity, but with better internet connections, more and more players are gaming online with their friends. It can actually be a way to build friendships and improve your communication and social skills. Apparently over 70% of gamers play online with a friend, either against them or working as a team.

Improve your mental health and wellbeing

Can video games ruin relationships or a marriage?

According to a study by Brigham Young University, 75% of spouses whose partner was a gamer wished they’d spend more time on their marriage than playing video games. However, when both partners played video games, 76% said it had a positive effect on the relationship. So if you’re an active gamer, you might want to choose your partner carefully, for your sake and for theirs!

How many marriages end because of video games?

Although marriages usually end due to infidelity, money problems or when both people just drift apart from each other, excessive video gaming can also be a factor. According to a divorce firm in Texas, 8% of marriages end up in divorce due to gaming. There are two ways to interpret this statistic. Firstly, the sample size may have been too low if they were only looking at the data of one state in the US. However, apparently not all couples put down the reason for the divorce when they filled out the paperwork, so this figure could be higher!

What can you do if your husband is obsessed with video games?

If you feel your husband is spending too much time on video games, and not enough with you or your children, then you need to find out why this is happening. Confronting him will often make the situation worse, so finding the reason for his obsession is a more worthwhile approach.

Understand that gaming is a hobby, and not the enemy

Gaming in itself is not a bad thing. Everyone has hobbies, and while you may prefer playing tennis three evenings a week, your husband may prefer firing up the console and gaming with his friends online. However, if he isn’t doing any chores round the house, or neglecting his parenting duties, such as not helping out with your baby, then that’s more serious.

Your husband will just interpret it as nagging if you try and bother him when he’s in the middle of a gaming session. Talk to him afterwards when you are both calmer.

If your husband enjoys gaming, he doesn’t have to stop. After all, you wouldn’t want him to ask you to stop one of your hobbies? Alternatively, offer a compromise. This could be about sharing the housework more, or watching an episode from a box set together each week.

Despite all this, if he’s staying up all night playing video games then you definitely have a problem. You will probably need to speak to a counsellor to talk through the issue and deal with his addiction.

Why do many parents hate gaming?

While computer games are fun for children to play, many parents have a different view. Some feel they can have a negative effect on the behaviour of their kids, especially if they play games with fighting or some form of violence.

Also, some parents feel video games can be too addictive, so their children will want to play them for too long. Consequently, they won’t go outside and get some exercise, choosing to sit down for hours on end staring at a screen. Finally, many are concerned that playing games with animated characters isn’t healthy for their social development, as they’d rather their children make friends with kids in the real world.

Should parents allow their children to play video games?

Although parents are right to have some concerns about video games, they are some benefits to playing them. It can be fun to play with their friends online, which is good for their social development, and it can improve their problem solving skills. While every parent has the choice whether their children play video games, moderation is the key, along with playing ones which are age appropriate. Obviously if children are playing violent games for hours, studies have shown it can have a negative effect on their behaviour.

How many hours of video games a day is unhealthy?

For children, the American Academy of Pediatrics recommends no more than 2 hours per day for older children. Screen time should be avoided altogether for children under the age of 2.

Why do parents hate Minecraft?

Some parents feel Minecraft is just too addictive for their children to play, as it can seemingly go on forever, without an end. However, some feel it offers their kids a creative outlet to explore and develop new skills.