Years ago I worked at a boarding school in the UK and I was struck by the names of some of the pupils. Private school education in the UK is very expensive so it’s normally only reserved for wealthy families who often name their children differently do what you may find in a standard state school. I remember coming across some very traditional names like Harriet, George and Edward. But there were also some more flamboyant choices like Augustus and Balthazar!

Old money names are particularly on trend right now. There’s been a flurry of videos on social media lately sharing lists of “old money” or other so-called luxury names to choose for your baby. It’s a big deal to choose a name for a new baby and you want to get it right. An old money name may be more than a name. In fact a smart name choice could also set your baby up for success. Let’s talk about what an old money name is and look at some examples. 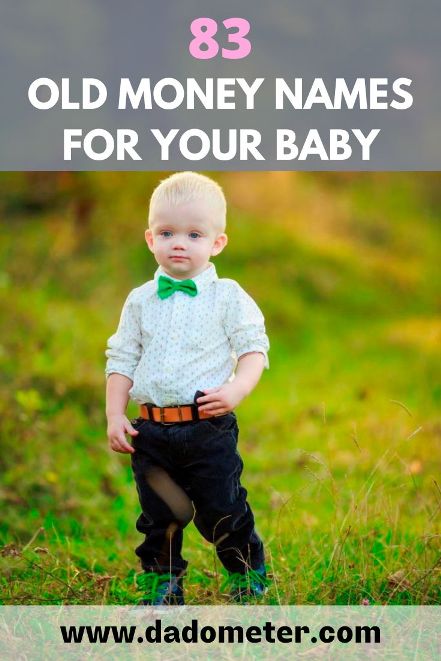 What is an old money name?

Old money is a term that refers to families who have been wealthy for generations. Often these families are landowners with a lot of assets. An old money name is one that has been around for a long time and is often chosen by these rich and wealthy families. But everyday families can also choose these names as they carry a certain charm. Recently they have had an increase in popularity, partly due to mass “old money name” videos that feature on TikTok and Instagram.

Why would parents want a rich name for their child?

Parents may simply like the sound one of these rich names for their child and choose it based on that alone. There are plenty of lovely names that fall into this category that parents like and have liked for decades. Other parents choose an old money name intentionally for two main reasons:

Some people in certain circles assume that people with old money names are wealthy, well connected and successful. Parents who choose an old money name may want others to associate their child with this rich world. The idea is that their child will be best set up for job opportunities and connect with the right people to be successful.

Others like the idea of projecting themselves as wealthy successful families and choose names to reflect that. Some of these parents have the funds to back it up and others just admire those who do.

There are names that are more common in Britain, although there is also a lot of crossover with names in the USA and Europe. Here are some examples of predominantly British old money first names, with the most popular shortened rich name versions in brackets, to give you some ideas.

There’s plenty of inspiration from the British Royal Family over the years as well as other well known wealthy families to keep the ideas coming. Have a read of this article for more.

Here’s a list of old money first names in America, with the most popular shortened version in brackets, to get you started.

American rich names tend to be classic, simple names that have been used for generations.

European old money names in Europe vary from country to country. However, as you’ll see there is lots of name overlap between the most well-known languages and English.

Some of these European names could be easily adapted and made into cute shorter names for your baby. Leonardo turns into Leo for example. Have fun with these, try them out and see if they might be right for your little one.

How can you make a rich name more unique?

You can make a rich name more unique, although you may find some names are best left unchanged. This is especially true if your goal is to embody the old money lifestyle.

It is a big decision to choose a name for your baby and most parents spend a lot of time thinking about it. Consider the meaning and history of the names on your shortlist and if you do choose an old money name, for whatever reason, make sure it is one you like and can imagine repeating for years to come!