Car seat safety has changed a lot over the past 20 years. When I was a boy growing up in the UK, car seats weren’t rear facing at all and the law was very different to what it is today. In fact, until as recently as 2006, children over the age of 3 only had to use a car seat or booster seat, “if there was one available”. Imagine that? Also, children under the age of twelve were also able to sit in the front of the car without a car seat. How times have changed…

This content may contain links to products and services. Please assume all such links are affiliate links which may result in me earning a commission (at no extra cost to you). 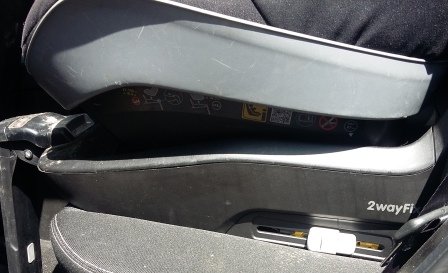 *In 2013, the EU introduced ‘i-size’, another regulation designed to keep infants in the rear facing position for longer, up to 15 months, rather than the standard 12 months.

In this article, let’s take a detailed look at the differences between the LATCH and ISOFIX car seat regulations.

LATCH has been a safety requirement to use with US cars and car seats since September 1st 2002.

It stands for Lower Anchors and Tethers for Children (LATCH).

In this system, vehicles are fitted with lower seat anchors located in the crack between the car seats, and a tether anchor which is found behind the seat. Since 2003, the regulations state that the lower anchors should be in at least two seating positions, and tether anchors in three positions.

Sometimes these lower anchors can be quite hard to spot and you have to pull apart the crack in the car seat to find them. The tether anchor location can vary depending on the vehicle. For example, it can be attached to the roof, to the floor or fixed to the back of the car seat.

What is the weight limit for LATCH?

In order for the lower anchors to function safely, the combined weight for car seat and child should not exceed 65lbs.  If it does, then you should secure the car seat using the seat belt and tether.

How do you install a car seat using Latch?

Here’s a video tutorial on how to install just the car seat for both the lower anchor connectors and tether.

And here’s how to install just the lower anchor connectors if you’re using a car seat base.

Do European cars have the LATCH system?

Although European cars use ISOFIX (and i-size), you shouldn’t have an issue connecting your US car seat safely.  This is a popular query for US travellers when they visit Europe and they want to hire a rental car which can support their US car seat. In fact, a lot of newer European cars have started using top tethers since around 2012. However, the safest bet is to call the car hire company well in advance of your trip so they’re aware of your requirements for using a US car seat.

LATCH is required on all car seats, and it’s installed on most vehicles since September 1st 2002. However, it’s not compulsory for booster seats, car beds or vests.

Essentially it’s the EU equivalent of LATCH. It involves attaching the car seat base to metal anchor points that are built into the vehicle in the cracks between the seats. On some car seats you can connect directly to the car using ISOFIX, but in the main, it’s more common to attach using a base. Once the connectors are in place, the third step is to extend the support leg from the car seat base and attach it to the floor.

This is what we used for my daughter with the Maxi-Cosi 2wayfix base.

However, some ISOFIX car seats have a top tether which attaches behind the rear seat. ISOFIX can be used on infant car seats (Group 0) all the way up to Group 3 car seats, when the child reaches 12.

What are the different types of ISOFIX?

There are three types of ISOFIX car seats.

This is the least desirable option for most parents. Some car seats are only permitted for use in specific vehicles. This might be because of certain design characteristics of the car seat. When you choose your car seat, make sure you research thoroughly whether it’s suitable in your vehicle.

This is where your have the standard two anchor points and the extended supported leg which attaches to the floor.

A lot of car seat bases have this feature, including the Maxi-Cosi 2wayfix which is what I’ve been using for my daughter the past 3 years.

Most new cars are Universal ISOFIX approved (but make sure you check this before buying your car seat). It means the car is equipped with two anchor points along with an extra top tether which attaches to the rear (similar to the LATCH system)

Is ISOFIX safer than LATCH?

This is very hard to say as the systems are different, in different countries with different laws and regulations. The advantages of both systems are that they minimize the risk of installing car seats incorrectly, and in tests they are proven to improve safety significantly.

With ISOFIX, according to one study 94% of parents use it correctly. This is because it’s fairly straightforward to install and you hear an audible click so you know it’s in place properly.

Can an ISOFIX car seat be used in a car without ISOFIX?

Most ISOFIX car seats can be used in cars which don’t have the necessary fittings installed.However, you will have to use the seat belt method instead, which is a safe option, but unfortunately many parents don’t do it correctly which puts your baby at more risk when you’re in the car.

Furthermore, there are some ISOFIX car seats which can’t be attached using a seatbelt, so this can present a problem if you plan on using a car which doesn’t have ISOFIX installed.

Our current car seat, the Maxi-Cosi 2wayPearl falls into this category. It’s a great ISOFIX car seat, but you can’t use it with a seatbelt.

What is the weight limit for ISOFIX?

The combined total weight for ISOFIX for both car seat and child is 33kg (72.5lbs). Anything above this and you should use a seat belt.

How do you install an ISOFIX car seat?

Here’s a video on how to install one with a car seat base.

Since 2011, it has been compulsory for all vehicles bought and sold in Europe to have the ISOFIX system installed. However, it is not mandatory for car owners to use it as you can attach a car seat using a seat belt instead. Just remember according to one survey, 8 out of 10 car seats aren’t fitted correctly and the primary reason is using the seatbelt incorrectly.

LATCH vs ISOFIX – What’s the difference?

Both of these systems have more in common than differences. However, here is a quick summary of how they are different.