If you choose to use disposable diapers for your baby, you will get through a lot before they are properly potty trained. And I mean a lot. Your infant will likely get through around 2,500-3000 diapers in their first year (I tried my best to calculate this here), so that’s a lot of diapers which can end up in landfill. 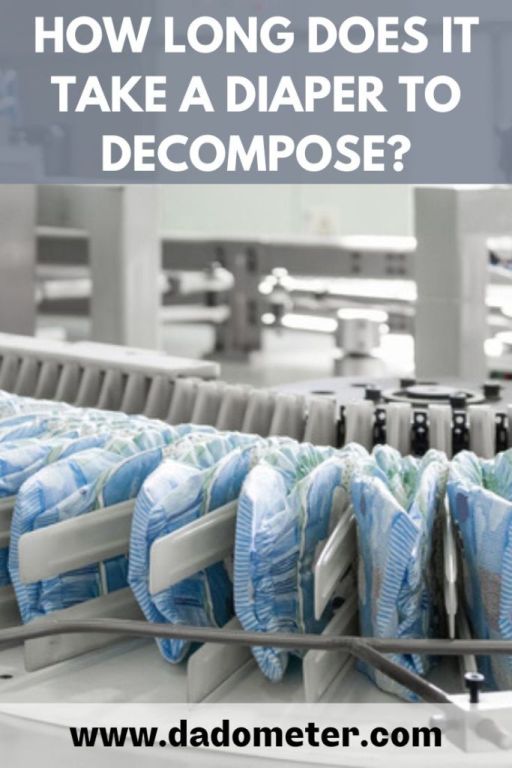 Unfortunately diapers contain plastic which means they are not biodegradable. Many experts believe it will take around 500 years for a disposable diaper to break down and decompose. However, no one knows for sure because disposable diapers have only been around since the 1940s. In this article, let’s explore this topic in more detail.

How do things decompose?

When an object decomposes, its chemical building blocks break down into simple compounds and end up in the ground for nature to reuse again. This is a completely natural process that has been around since the dawn of time. However, since the industrial age we have created products that aren’t biodegradable, which means they take a long time to decay and they also release harmful toxins as they slowly break down. Unfortunately, plastic is one such material that falls into this category and we use it everywhere in so many things, including diapers.

How long does it take a diaper to decompose?

It is believed it will take 500 years for single use disposable diapers to decompose. That being said, no one knows for sure yet because they have only been around for the last 80 years or so. We shall have to wait another 400+ years to confirm this one! Regardless, the reality we can all agree upon is that the average diaper takes a very long time to break down. And considering the millions of diapers that end up in landfill this is a big problem for the environment. Furthermore diapers can release harmful methane gases, and the dirty faeces can end up in groundwater.

What about biodegradable diapers?

There are a number of brands who claim their diapers are nature-friendly, but in reality they are often not 100% biodegradable and may still contain some plastic. Many of these same companies have taken steps to produce diapers with a smaller environmental impact though. This can include using more natural fibres, like bamboo and making their diapers dye and chlorine free.

Check the diaper packaging carefully and read the small print to understand what eco credentials each company claims to have. Some diapers could be biodegradable, but most are not entirely. It can be hard to determine which ones are because of their clever branding and the use of buzzwords that draw us in like nature, eco-friendly and sustainable. At the moment experts think that a 100% biodegradable diaper will take 50 years to decompose. This is considerably less than the non-biodegradable one.

What are disposable diapers made from?

The textbook-style explanation from Diaper Answers is that the average diaper is, “primarily made of cellulose, polypropylene, polyethylene and a super absorbent polymer, as well as minor amounts of tapes, elastics and adhesive materials.”

Why are diapers so bad for the environment?

All diapers, single use and reusable, have a carbon footprint and impact on the environment. There is no getting around it. Both styles of diapers need to be manufactured in the first place and then disposed of when they are finished with. Reusable ones need to be washed (and potentially dried) too.

Disposable diapers are produced on a mass scale and you need thousands for each baby over their first years of life. This means more material is needed and more emissions generated to make them than their reusable counterparts. They are notoriously hard to recycle or compost and mostly end up in incinerators where they are burned and release harmful gases or left in landfills that poison the earth for centuries.

Apparently every minute, around 300,000 disposable diapers end up in landfill worldwide.

Reusable diapers have a smaller carbon footprint in their manufacture because you don’t need to buy as many. However, there is a considerable amount of energy used to wash and dry them each time. Some people opt to use a dryer and others air dry reusable diapers, so this approach does use less energy. Reusable diapers still have to go somewhere once a family stops using them and may well end up in landfills right next to their disposable equivalents.

Can you recycle diapers?

You cannot recycle a whole single use diaper. For the most part, once a diaper has been soiled it is considered contaminated waste and must be thrown away. It is nearly impossible to separate the diaper materials from your child’s waste. Although according to Instructables you can compost the absorbent filling of single use diapers and then dispose of the rest of it in the garbage.

You could technically repurpose reusable diapers to give them a second life once you no longer need them as rags or something similar. Some local authorities offer textile recycling schemes where you may be able to recycle old, clean cloth diapers too.

How do you destroy diapers?

Unfortunately there is no easy way to destroy diapers. If you try to burn them, they will release toxic fumes so you’re probably better off just rolling them up and putting them in a sealed bag. However, you can rinse the soiled diaper first to remove any faeces. This will at least prevent it from ending up in the groundwater when it breaks down on a landfill site. However, this still doesn’t solve the issue disposable diapers cause to the environment.

Should we use cloth diapers instead?

The only real alternative to the disposable diaper are cloth ones. However, they are not as environmentally green as you might think. Although you can reuse them so they don’t end up on landfill sites, cloth diapers need to be washed regularly which releases dirty water and uses more energy and electricity to clean them, especially if you use a washing machine. Also, cloth diapers are more of a hassle to use as they are less absorbent, so you need to change your baby more frequently. They also look bulkier than disposable ones which many parents don’t like.

Essentially cloth diapers will work best for families who have time. If you and your partner are busy working full-time jobs and also trying to raise a family, time is one thing you don’t have, so disposable diapers are just a more practical option. However, cloth diapers are cheaper in the long run as you can reuse them many times.

What are the most eco-friendly diapers you can buy?

There are two choices for eco-friendly diapers; reusable or biodegradable, single use. For readers in the USA, here is a nice list from Business Insider that gives the lowdown on the most popular eco-conscious brands.

At the end of the day, none of the diaper choices out there are perfect and they all have a degree of negative impact on the planet. The reality is that you need diapers for your baby and it’s important to choose the option that works best for you. Some parents are restricted by the cost of biodegradable diapers or don’t have the time to wash and dry reusable diapers. Others have funds and time on their side to inform their decisions about the diapers they use.