I never had a pacifier when I was a baby and neither did my brother. So after trying to lead by example and resist using them with my own children, I thought it would be a walk in the park. Needless to say I failed miserably and my wife and I caved in after about a month with both our kids! 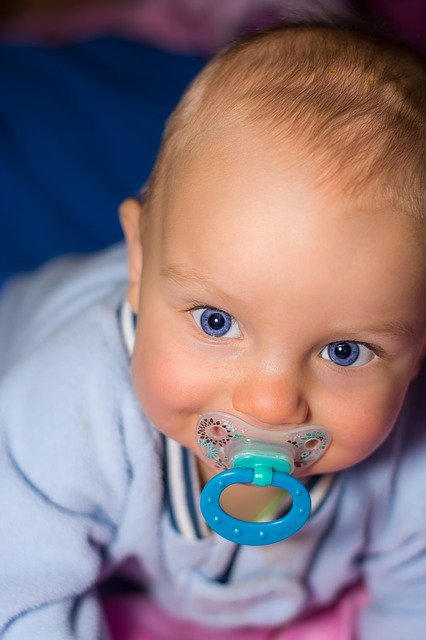 When used correctly, pacifiers are so useful, especially to calm a fussy baby when you’re at your wits end and suffering with sleep deprivation. However, one of the most frustrating things is how they can pop out of your baby’s mouth, at the time when you want it in their mouth!

So how can you solve this problem? Let’s delve into this in more detail.

How do you stop a pacifier falling out?

If you ask any parent about this issue, more often than not, it revolves around the pacifier coming out during the night with the baby crying and waking up because they can’t pop it back in.

There’s no guaranteed method to stop this, but here are 2 methods which some parents swear by:

One mum from the UK tried this with her daughter, placing 10 pacifiers around the crib. She claims she didn’t have to go into her room for 8 months during the night! However, some paediatricians warn that this doesn’t solve the sleeping issue long term because children are still reliant on the pacifier to fall back to sleep at night. Basically, babies who still need the pacifier are not learning to self-soothe, a vital skill that some infants find a lot harder than others.

This approach only works if your baby can’t roll over yet. It works because your baby can easily access the pacifier when they need to. Some parents claim this works well, but I’m not entirely convinced!

Can you leave a pacifier in a baby’s mouth while sleeping? Should you take it out?

You can leave a pacifier in a baby’s mouth when they’re sleeping. In fact, it’s one of the most effective ways for newborns to settle down to sleep. If they’ve had the full bedtime routine, including a feed, sometimes a fussy baby just needs to suck on a pacifier before nodding enough to sleep.

However, be prepared that this approach is only a temporary solution. While it might work initially in the first few months, after some time, babies develop sleep associations. This can be anything from being rocked to sleep, nursing when they’re not really hungry, or needing a pacifier. If your baby develops a strong sleep association to the pacifier and they can’t find it during the night, this can result in them waking up 3,4 or 5 times a night, leaving you and your partner completely exhausted.

Over at Baby Sleep Science, they talk about this in a bit more detail, including the various stages in the first year with pacifiers and sleep.

To be honest, with both my children, we got rid of the pacifier completely at night from around 6 months. My son still uses it during the day, as he’s still only 8 months old, and we got rid of it completely when my daughter was around 15 months. In my opinion, it was totally worth it. With my daughter, she slept much better and started sleeping through the night shortly afterwards. However, the bedtime routine was very tough for about 3 nights, with lots of drama and crying. My son doesn’t sleep through the night just yet, but he only wakes up once. He found it a lot easier to give up the pacifier during the bedtime routine.

Is it bad to force a pacifier?

You shouldn’t force your baby to use a pacifier, although it might take a day or two for them to get used to it. Just use your judgement to gently ease them into using one. Sometimes babies spit out the pacifier not because they don’t like it, but because they want to let you know they are hungry, tired or need a diaper change. It took my wife and about two days for our son to totally accept using the pacifier.

What age can a baby keep a pacifier in the mouth?

You want to introduce the pacifier when your baby is around 1 month old, not earlier, as they need to be confident nursing or drinking from the bottle.

How do you get a baby to sleep without a pacifier?

If your baby has already formed a sleep association with the pacifier, then this will present a problem. You can go cold turkey, or you can try and do it in stages. Start doing it with naps and see how it goes. Here are some good tips on getting a baby to sleep without a pacifier.

In my situation, both my children had a strong sleep association with the pacifier, and my wife and I probably didn’t have the best nap routine during the day. I bought the Sleep Sense program by Dana Obleman, which sorted everything out and made a massive different in just a couple of days. Feel free to get in touch if you have any questions about it!

How long should a child use a pacifier?

The general advice is that it’s best to limit the use of the pacifier as much as you can, and start to wean your baby off it once they are around 12 months or a bit older.

How do you ditch the pacifier?

Here are five tips you can follow which can help your baby get rid of the pacifier for good: