Colors are very evocative. If you think of red, it may conjure up feelings of ‘love’ and ‘passion’, where as if you think of white, it can often depict ‘purity’ and ‘innocence’. Plenty of baby names have a color as their meaning or at least something linked to a color.

In this article, let’s look at some baby names that mean ‘yellow’, or are at least related to yellow. After all having a baby brings a ray of sunshine into any parent’s life. (except when it’s 4am and they’ve already woken up 3 times that night!) 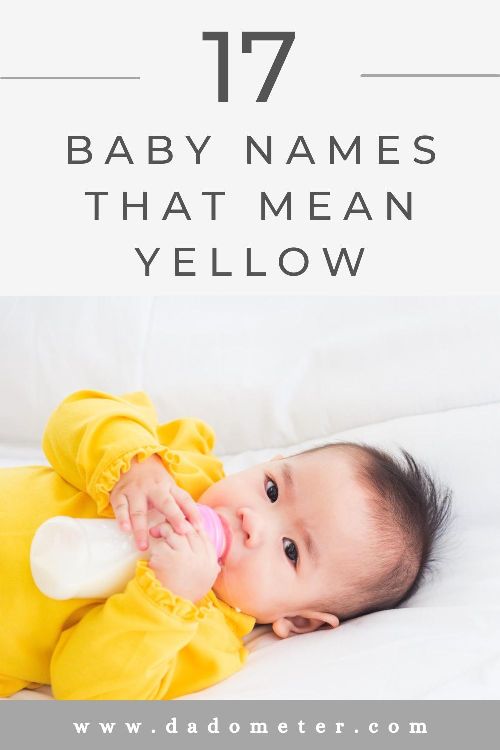 What does yellow mean?

As you know, yellow is a bright color that is often associated with the sun. It creates a feeling of warmth, positivity, hope and happiness, which makes it an excellent choice for a baby name. Here are some boys, girls and unisex names that have some aspect of yellow or gold in their meaning.

This name can be unisex but it’s predominantly a male name. It means ‘yelllow-haired’ and is of Irish origin. It is considered to have come from the Gaelic word buidhe which means ‘yellow’. Probably the most famous Bowie is a certain musician called David Bowie. He sometimes had yellow hair, but he would often change his appearance to fit his alter ego Ziggy Stardust.

Boyd is of Scottish origins and means ‘yellow’ or ‘blond’. It is mainly used as a last name, but you can sometimes find it as a first name. It probably originates from buidhe, the same Gaelic word which influenced the name Bowie. Boyd has never been the most popular name in the USA, but it started to drop significantly after 1970 and no longer features in the top 1000 male names.

This name is popular both in North and South Korea. In fact around 20% of South Korea’s population have Kim as a last name (kind of like the English surname Smith or Jones!) However, unlike Western cultures, in Korean they put the surname first and their given name second. In Korean, Kim means ’gold’.

This is a Greek boy’s name and it means ‘touch of gold’. You’ve probably heard the phrase ‘Midas touch’ referring to someone who seems to be successful in whatever they pursue. The name comes from the famous King Midas in Greek mythology.

This girl’s name has a couple of different meanings and origins throughout the world. In Arabic, it comes from the word ambar which means ‘jewel’, but in Hindi it means “sky”. However, in most Western countries it is normally associated with the color, which comes from the French language. Amber as a color is a mix of yellow and orange.

In the USA, the name was fairly rare in early 20th century, but it became a lot more popular from 1970-2000. However since the turn of the 21st century it has started to lose its popularity again.

Aurelia comes from the Latin last name Aurelius, which itself was derived from the word aureus which means ‘the golden one’. In the US, the name has had an interesting journey over the past 100 years in terms of its popularity. Aurelia has always been a rare name for girls, but it dropped out of the top 1000 names in 1950, before coming back again in 2012.

This girl’s name means ‘yellow wildflower’ and it’s of English origin. It is a very rare name and hardly used these days. According to BabyCenter, the name was ranked 9,718 on their list of girl’s names in 2002. If you choose this name for your daughter, she’ll almost certainly be the only one in her school who has it!

This is another name of English origin stemming from the word daegeseage, which means ‘day’s eye’. The center of a daisy flower is bright yellow with white small petals on the outside, so if you choose this name for your daughter, she will have a connection to the color yellow.  In the US, it’s also a fairly popular name, finding itself in the top 200 every year since the year 1990.

Although it doesn’t mean yellow directly, Elaine is a French girl’s name that means ‘bright, shining light’. It comes from the French girl’s name Helene and it was brought to Scotland many years ago, before morphing into Elaine. It’s not as popular as it once was (it was ranked in the top 100 in the USA between 1920-1950), but it has never been out of the top 1000 names since 1900. Those of you who are Seinfeld fans may appreciate the name Elaine (although she was a very narcissistic character!)

A girl’s name of British origin, Goldie literally means ‘made of gold’. It has a Yiddish origin coming from the name Golde or Golda. The name is not popular in the USA, falling out of the top 1000 in 1958. However, there was a mini resurgence in 2021 as it suddenly ranked #883. Maybe Goldie Hawn released a big film that year? J

Marigold is of English origin and means ‘golden flower’. Although it is not a popular name, you often find this name in novels, particularly ones connected to aristocracy. Those of you who watch Downton Abbey may have come from across the little girl, Marigold.

Nellie comes from the Latin word Cornelia which means ‘horn’ or ‘sun ray’. Although it was a popular name in the US, at the turn of the 20th century, it fell away and dropped out of the top 1000 girls’ names in 1979. However, since 2019 it has made a comeback. Now might be a good time to consider Nellie as a girl’s name if you don’t want something too rare or too common!

Like Buttercup, this is another pretty girl’s name that means ‘yellow flower’.  It’s not a popular name by any means, but it likely originated from Iran where the flower is thought to have come from.  The most famous person with this name is the English actress Saffron Burrows who has appeared in some big movies over the years such as Troy and Enigma.

This name has its roots in Gaelic and Scottish traditions and it comes from the old Irish word blá which means yellow. Blaine seems to have originated around the 6th century through Saint Bláan, a Scottish saint who is famous among the Irish and Scottish people. In the US, Blaine has never been a particularly popular name. As of 2021, it was ranked #986 with only 220 births that year bearing the name.

I thought this name was only a girl’s name, but it can be used for boys too (although very rarely). Dawn comes from Old English, meaning “daybreak” or “first appearance of light”, which as you know can create a lovely warm yellow colour in the sky as the sun rises. In the US, the name has lost its popularity as a girl’s name in recent years, dropping out of the top 1000 in the year 2000. It was a very popular name though in the mid-20th century, finishing in the top 100 every year from 1956-1982.

This gender-neutral name is of Hebrew origin which means ‘prayer for’ or ‘peace’ and is probably a variant of Saul who was the first king of Israel. However, this name also has Latin roots and is quite popular in Spain and Portugal. In these countries Sol means ‘sun’.

You can’t get a brighter name than Sunny can you? It means “sunshine, bright, bubbly and cheerful”, so you can definitely get a yellow vibe from this name. Sunny is a unisex name, but in Western countries it tends to be more popular with girls.