Choose a baby name that means victory and you will give your latest addition a strong name that carries weight for their whole life! Many parents look for names with powerful meanings to send a message to the world about their child’s potential. It helps that many of these names are classics and have many variations to select from.

A name that means victory, conveys a message about a person. It tells others that they are well placed to succeed. There are quite a number of names to choose from various cultures, periods of time and with different spellings. Have a look at this list and see if there is a name that speaks to you. 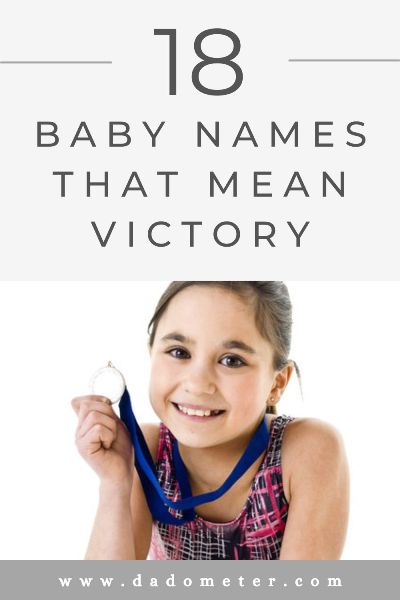 Here are some suggestions for baby boy names that mean victory. In reality most names can be used or adapted for baby girls too. Say them out loud, look at the origins and see what you think.

Victor as a name does what it says on the tin. Victor means victory, as in the victor of battle, in particular against evil and the devil. It is one of the first known Christian names and therefore it carries a long history.

This well known name is Greek in origin and means victory or triumph. It is easily shortened to Nick, Nic, Nicky or spelt in many different ways such as Nicolas or Nickolas. There are lots of options here to choose a traditional name and yet still be able to personalise a name for your baby.

This modern sounding boy’s name actually has a deep history. It means the collective victory of a people and symbolises winning in a contest.

Colin is a traditional name that means ‘triumph over the enemy’. It’s a tried and tested classic name that still conveys a strong message.

Nico has a lot in common with Nicholas in that it also means victory and is derived from Greece. This one is short, sweet and delivers its strong meaning well.

This name is pronounced “Kye”. The name has origins in many parts of the world including Hawaii. However, its meaning in Chinese is the version that is connected to victory. This name could also be spelt Cai or adapted to Ky or Kian for example.

Sigmund has Germanic origins and literally means victory. It doesn’t get clearer than that! There are some neutral variations or girl’s names too like Sigfrid. The famous neurologist Sigmund Freud probably comes to mind when you think of this name

Sixten is a modern day Swedish name and has its roots in Norse history. It means to take victory and is a strong name choice for your little one.

Here is a list of girls’ names meaning victory. Some can easily be adapted for boys’ names as well and most of them can be shortened or adapted to your tastes, while still carrying the same meaning.

Victoria is at the top of this list because you can see the meaning at first glance. Victoria, of course, means victory. In fact, in Roman mythology, Victoria is the goddess of victory – if that doesn’t summon images of strength I don’t what does!  It is a classic name passed down from generation to generation that has stood the test of time well. There are seemingly endless variations and spellings to choose from too like Vicky, Tory, Vikki and Ria.

This well known name is Greek in origin and means victory or triumph. It is easily shortened to Nikki, Nicky or Nicole. There are lots of options here meaning you can pick a traditional name and still personalise it for your baby. Another option is to take inspiration from continental Europe and try Nicolette from France or Nicoletta from Italy.

Veronica means ‘she who brings victory’. There are popular shortened versions of this name to consider too such as Ronnie, Nica and Verity.

This name means ‘bringer of victory’ and is traditionally a girl’s name. Other connected variations are Berni or Bernadette which have Germanic origins and translate to “brave as a bear” or “victory hunter”.

This name technically means ‘people of victory’ and has Greek origins, although it has been adapted by many other cultures and languages too. There are other spellings to play with here such as Collette or similar names like Colleen to weigh up.

These two names mean strength in victory. Each version can be spelt in several ways such as Lorrie, Loura and Lorra based on your individual preferences.

Now, you could use or adapt any of the names above to get a neutral name that means victory. You know best what name suits your baby. However, here are a few specific options that could easily work for any gender:

This name means victory and its origins are found in Sanskrit. It is a bold name to carry the weight of the meaning, while standing out from the crowd. It works for both boys and girls. There are options to vary the spelling and pronunciation to suit.

This is a strong unisex choice with a widely agreed upon history and meaning. Nike is the goddess of war in Ancient Greek mythology and symbolises victory and triumph.

This name works with ease for all genders and means victory over all else. The literal breakdown of the name is “all” and “win” so the meaning is obvious. It has roots as a last name in England and other European cultures.

For all David Bowie fans, take note that Ziggy is derived from Sigmund, a German name meaning victory. It would make a bold choice for a boy or girl and adds some musical history into the mix too. I met a Ziggy once at university and they made an impression, for all the right reasons!

There are lots of names to choose from here, all of which incorporate the meaning victory or victor. Have a play around with them, say them out loud and write them down to see how they will look with your last name. Finally, think about any variations, shortened versions and the different spellings before you make your decision.

Anna is a mum of three who loves exploring the outdoors with her family and border collie. She has an MA in Childhood and Youth Development.