When my wife and I picked the names for our two children, we never considered the meanings at all. However, in some ways I wish I had as it was really difficult to come up with a baby name, especially for our daughter. We had to pick names which sounded good in both English and Russian which made the task even harder!

So thinking of a meaning you like first can be a good strategy and make the whole baby naming process a lot easier. For example, when you get the joyous news that you’re expecting a baby, not only is it a pleasant surprise, there is also a lot to be thankful or grateful for. So it can be a great idea to choose a baby name which has this meaning. Here is a list of 14 names that mean thankful or grateful. 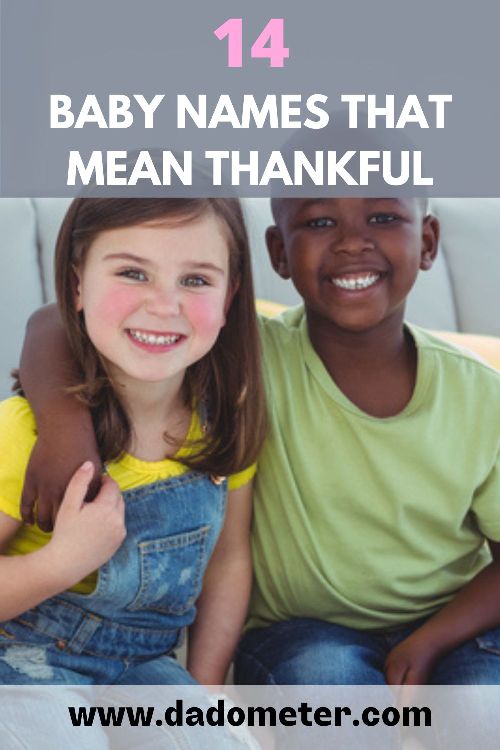 Bongani means ‘one who is grateful’ or ‘thankful’ and it comes from the Zulu language in South Africa. It’s not a particularly popular name in many Western countries, not registering in the top 1000 in the USA for any year since 1900. Therefore if you want a unique name for your baby boy, this could be the one to go for.

Jobe means to ‘give thanks’ in the Igede language which is found in parts of Nigeria. However it is also a variant of the Hebrew name Job, which gives it the unfortunate meaning of ‘persecuted’. I think the former meaning is a little more pleasant for a child!

This name is of Arabic origin and means ‘thankful’ or ‘grateful’. According to The Bump website, Shakir has a rank of #9263 in the US as of 2021, so you won’t really find this name much in most Western countries.

Like Shakir, this is another name of Arabic origin and it also means ‘thankful’. Shukri can also be spelt in a number of different ways such as Chokri, Shokri and Shoukri. There is a female version of this name called Shukriya.

Tatenda is a name that comes from Africa and it means ‘thank you’. It is not a particularly popular name in the West.

Gracie is a pretty girls’ name that actually means ‘blessed’. However, it probably came from the Latin word gratia which means ‘thanks’. It is a fairly popular name, particularly in the US, finishing in the top 250 every year since 2000. In fact the only time it has disappeared out of the top 1000 in the past hundred years was a period between 1970 – 1997.

This is an Arabic girls’ name that means ‘thankful’ or ‘to give thanks’. Most children with this name are usually Muslim so it is not a particularly popular name in most Western countries. Nevertheless, this could be an option if you want something unique for your daughter!

This girls’ name has become increasingly popular in recent years, almost certainly due to the rise of the US actress/singer Zendaya who has appeared in the Spiderman movies. The name means ‘to give thanks’ and comes from the word tendai in the Shona language, a dialect spoken in Zimbabwe and parts of Zambia. In 2021, 311 baby girls were born with this name in the USA.

Like Zendaya, this is another name that comes from the Shona language in the southern parts of Africa.  It simply means ‘thank you’ and could be a great choice if you want a name which is a bit different for your daughter.

If you’re a fan of the Colombian singer Shakira, then this can be a great choice for your baby girl. Shakira means “thankful” or “grateful and is of Arabic origin. The singer Shakira was very popular particularly in the late 90s and early 00s, which explains an appearance in the top 1000 baby names from 2000-2006 in the USA. It was most popular in 2002, when 512 babies were born with this name in the US.

This name comes from Swahili (or Kiswahili) so it tends to be popular in Tanzania, Kenya and Mozambique. Asante simply means ‘thank you’. It is mainly a boy’s name, but it can be used for girls too as Asante is a form of the girl’s name Ashanti. You may have heard of the American singer ‘Ashanti’ who was very popular at the turn of the 21st century. As you can imagine the name is not very popular in Western countries. In the USA, according to The Bump website, the name is ranked #7,064 in terms of its popularity.

Jayden is a unisex name that means ‘thankful’. It comes from the name Jadon, someone who helped to build the walls of Jerusalem according to the Old Testament. As a boys’ name it is very popular in recent years, particularly in the USA where it has been in the top 50 since 2006. However, as a girls’ name it has dipped after reaching a rank of #172 in 2007 and it no longer appears in the top 1000. There are a number of alternative spellings for Jayden, such as Jaden, Jadon and Jaydon. Famous celebrities who have this name include the actor and musician Jaden Smith (son of Will Smith and Jada Pinkett Smith). Britney Spears’s son also has this name.

Kuron originates from Africa and means ‘thanks’. It is slightly more common for girls to have this name, but some parents choose it for their sons as well.

This gender neutral name originates from the Yoruba people in Western Africa, specifically in parts of Nigeria, Togo and Benin. It means ‘I am grateful’ or ‘to give thanks to God’.