One effective tip for coming up with a baby name is to look at the meaning first and then work backwards to choose one you and your partner both like. Using this method you might just find a name you wouldn’t normally consider as it might not be from your culture, but it has the meaning you like. 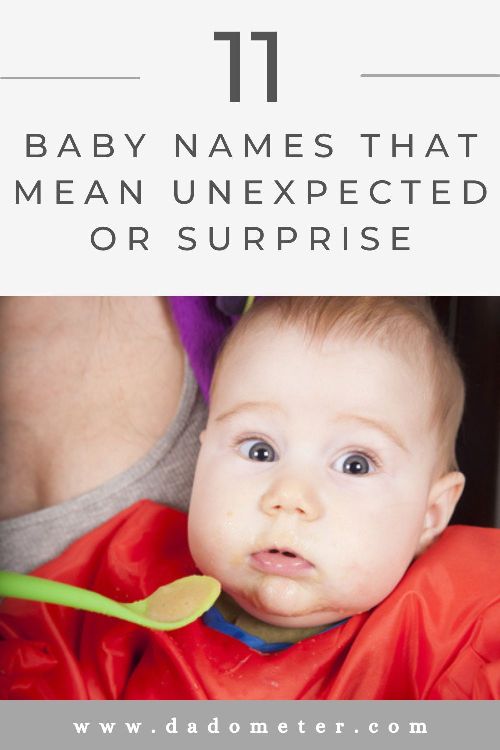 For example, some baby names have meanings such as beloved, or answered prayer, but what if your baby has come as a complete surprise (in a good way of course!). You and your partner may have been planning a baby for a long time and suddenly you get the good news, or it might just have happened without any planning at all! You may also choose to have a surprise if you don’t know whether you’ll have a boy or girl. Here are some names which mean ‘unexpected’ or ‘surprise’.

Despite looking at this topic in depth, I found there are very few names traditionally found in Western countries that mean ‘unexpected’ or ‘surprise’. You can find meanings such as ‘gift of god’, which is like a surprise, but it’s not a direct meaning. For this article, I won’t include these names.

This boy’s name is of Hindi origin which means ‘surprise’. However it can also mean ‘wonder’, so I guess you can interpret the name overall as a ‘wonderful surprise’!

This name is of Slavic origin and it means ‘unexpected’. It is fairly widespread in the former republics of Yugoslavia; Serbia, Bosnia and Herzegovina, Croatia, Montenegro, North Macedonia and Slovenia. It comes from the word nenedan which has the same meaning. In Slavic countries this name is sometimes given to the younger of two twins.

This is another boy’s name of Hindi origin which means ‘surprise’. Supposedly boys with this name are peaceful (this may be useful if you already have an older son or daughter who’s a bit of a handful!)

Bishoy is of Bengali origin and it means ‘surprise’.

This girl’s name is from India, from the ancient Sanskrit language, and it actually has a number of different meanings. As well as meaning ‘unexpected (in a pleasant way)’, it can also mean ‘little sister’, ‘predictable’ and ‘different’. There’s quite a range of meanings with this one. Take your pick!

Dariga is a name of Kazakh origin which means ‘surprise’. However, it can also mean ‘pity’ or ‘regret’ (I think ‘surprise’ is a more pleasant meaning when it comes to having a baby!)

Vismaya is of Indian origin and means ‘surprise’ or ‘amazing’. Usually girls with this name follow the Hindu religion.

This name means ‘surprise’ and it’s derived from the Telugu and Indian traditions.

As a girl’s name, this tends to be of Arabic/Muslim origin. However, for boys the name Mashama has closer ties to Africa. Despite this difference, the name means ‘one who is a surprise’ for both boys and girls.

This is a Spanish word which means surprise. However, it can be used as a name for boys or girls, although it is quite rare.

This name can mean ‘sweet’ and ‘kind’, but it can also mean ‘an unexpected gift’. It is of African origin, but it is also found in Scandinavia.