If you’re stuck trying to come up with a name for your baby, one thing you can try is to work backwards and find a meaning you like first. There are different name choices from cultures all around the world, but there is definitely some overlap in terms of their meanings.

For example, many baby names can have grand meanings, such as noble, hope or strength. However, for something to show gratitude one lovely meaning is ‘answered prayer’ or ‘God has answered’. After all what’s more magical than having a child and creating life, as it really is a blessing for every parent. Here are some boys and girls names which have this meaning (or at least very similar). 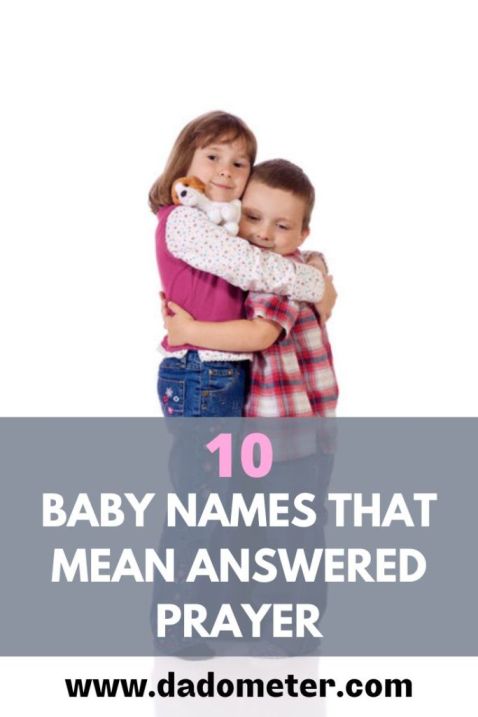 Lian has a different meaning in different cultures. For example, in Mandarin it means ‘lotus flower’ or ‘graceful willow’. Lotus flowers often represent purity and rebirth, while willow trees symbolize safety. However, in Hebrew Lian means ‘God has answered’.

Saul means “prayed for” or “asked for”. It has a very grand meaning in the Hebrew bible as Saul was the first king of Israel. While the name might be particularly significant for religious families, you might be interested in Saul if you’re a Breaking Bad fan (I certainly am!) Saul Goodman is the dodgy lawyer in the series.

Samuel means “God has heard” and comes from the Old Testament in the Bible. It is a very popular name worldwide, among African Americans, Jewish society and across European countries. Also, it might seem quite a cool name to choose if you’re a fan of Samuel L Jackson!

This name has a different meaning around the world. In Hebrew it means “God answers”, in India it means “free” and in Arabic it means “caring”. Anaya has gained popularity as a name since the turn of the 21st century and there are a number of variations you might want to consider; Anaiah, Anayah, Enaya and Inaya to name but a few.

Arabella means “yielding to prayer” or “answered prayer” and is of Latin origin. However, it can also mean “beautiful lion” in English (might be a good choice if you’re expecting a Leo!). Nicknames can include ‘Bella’ or “Ara”. Arabella is not too popular or too rare, which is often the sweet spot when parents are trying to think of a name.

A name of Hebrew origin, Eliana means “God has answered” and it tends to be popular in Italian, Portuguese and Spanish cultures. There are a lot of variations to this name such as Liana, Eleana, Elia and Eliane. This name also has a connection to Latin culture with the variation Aeliana, which means “of the sun”.

Pernita is of Indian origin and means “answered prayer”. If you want a slight variation, Parnita is one option you might want to consider.

Chinasa is a girl’s name that originates from the Igbo culture in Nigeria. It means “God answers prayers”.

This gender neutral name is of Hebrew origin.  It means “promised by God” as a     Jewish name, but in Spanish, it means “child of the moon”.

This name comes from the male name Haniel, which is the name of an angel in Jewish mythology.  Anael means “the grace of God” or “god has answered”. It is sometimes used as a boy’s name, but it is generally more popular for girls.